Temporary / No Longer On Display

All Hands on Deck

The framework for this project is a Cuban Refugee Boat which came ashore in Lauderdale by the Sea, Florida in December 2015. Through a grant by the Broward Cultural Division, Casey Eckles of Trash to Treasure created a project that spoke about the importance of maintaining healthy waterways. This eco-artwork is all about raising awareness to the connection between the kinds of products we regularly purchase and their full impact on the environment. Most plastic used to cover the boat was collected at local beach cleanups over a six month period. A recent report stated that by 2050 there will be more plastic in the world’s ocean than fish. By exposing plastic’s true life cycle and its effects on the eco-system, we learn to become more responsible via better choices. Under the guidance of the artist SusieQ, over 200 people contributed to this public collaborative. Some collected and/or gathered and cleaned beach plastic, others affixed one or more of the thousands of found beach items to the boat. Major sponsors were Flex Seal, Sailorman and Sal’s Towing. This project was located at Harbor's Edge Park but has since been decommissioned due to hurricane damage. 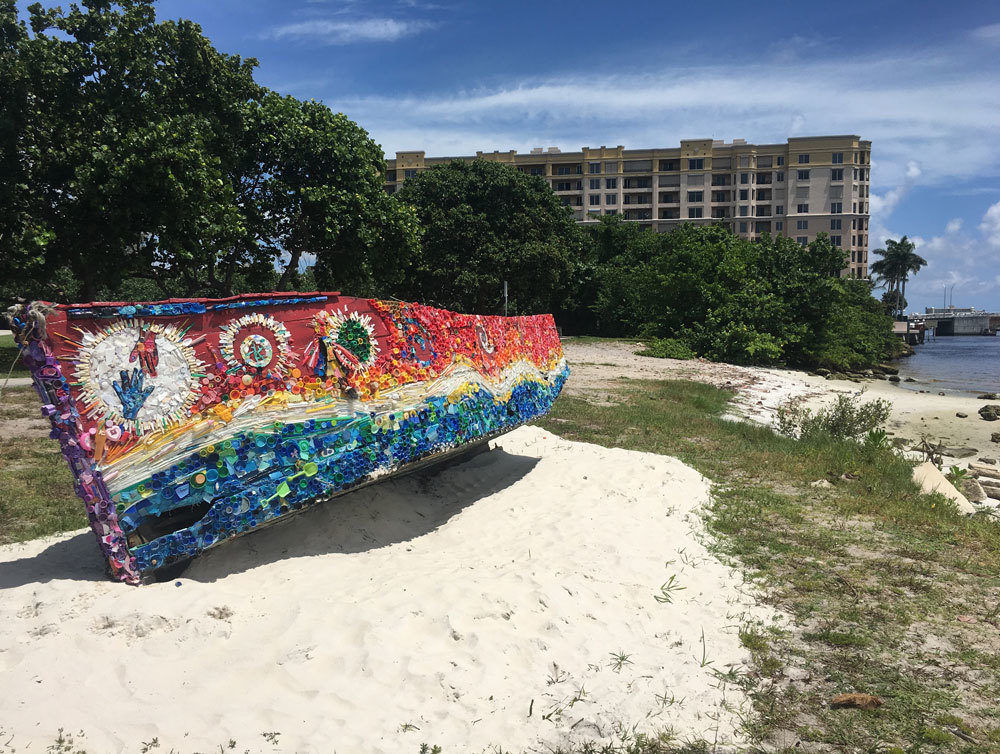 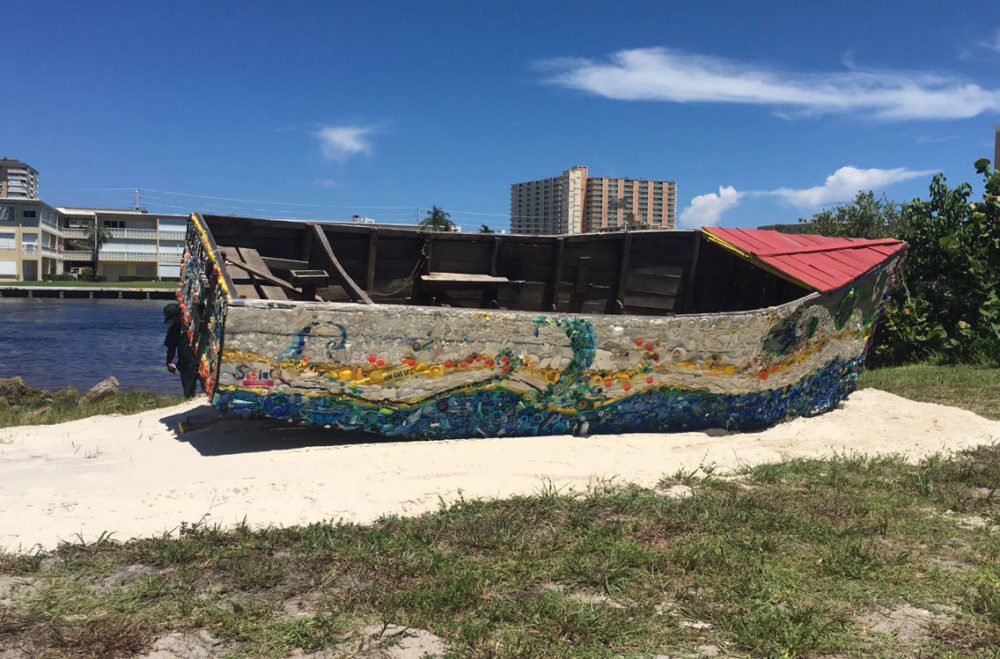 The City of Pompano Beach’s Public Arts Committee was excited to support several proposals to participate in Broward100’s Inside Out project. Inside Out is a global art project that gives communities all over the world a platform to express themselves through black and white photographs. Inside Out gives community members the opportunity to share their portrait and make a statement by capturing a collective message through headshots of individuals which are printed on posters, pasted on public spaces and archived online. This global platform allows people to tell their untold stories and transform messages of personal identity into works of public art.

The posters were temporarily installed on three buildings in the City: The Bailey, The Pompano Beach Amphitheater and the E. Pat Larkins Civic Center. They have now been removed. 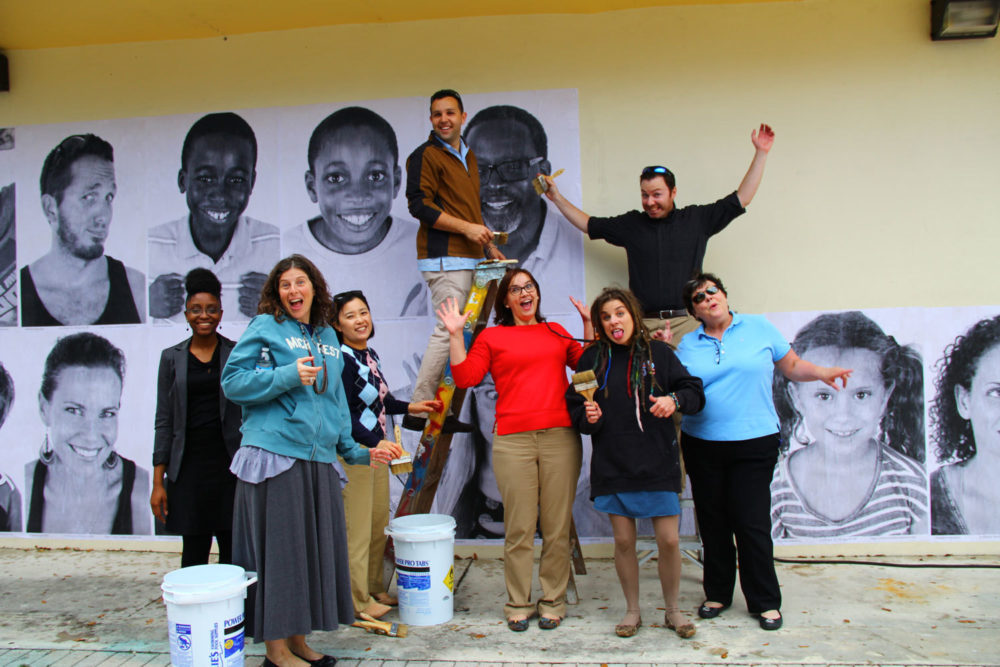 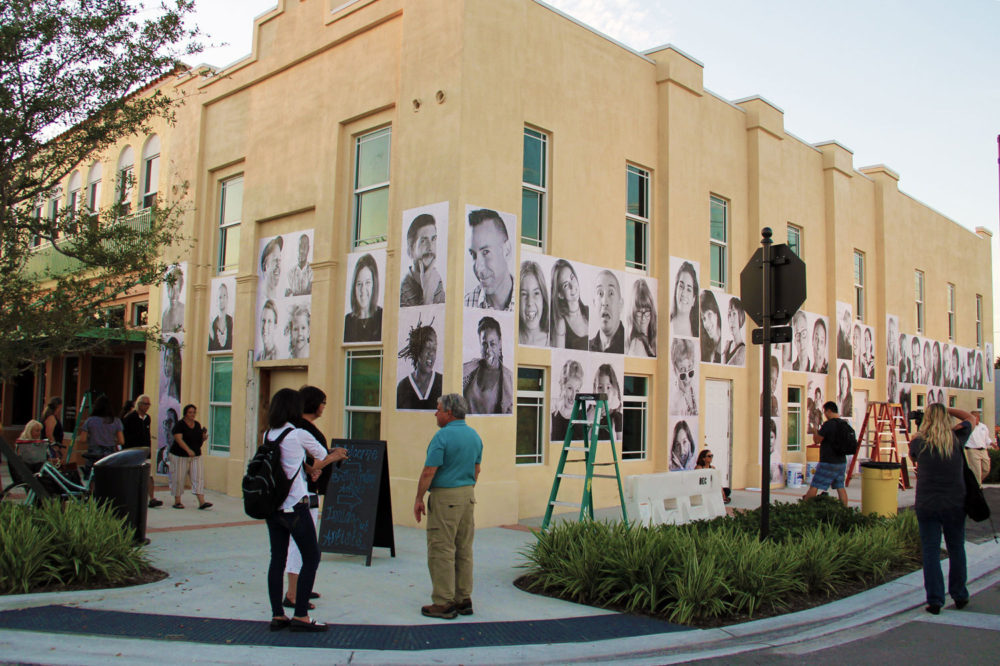 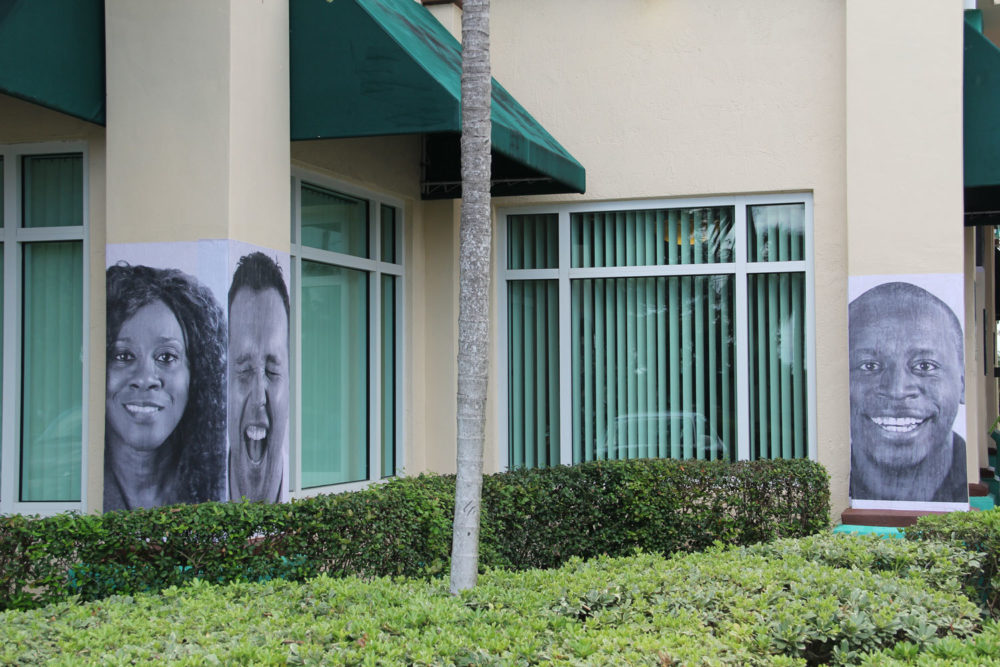 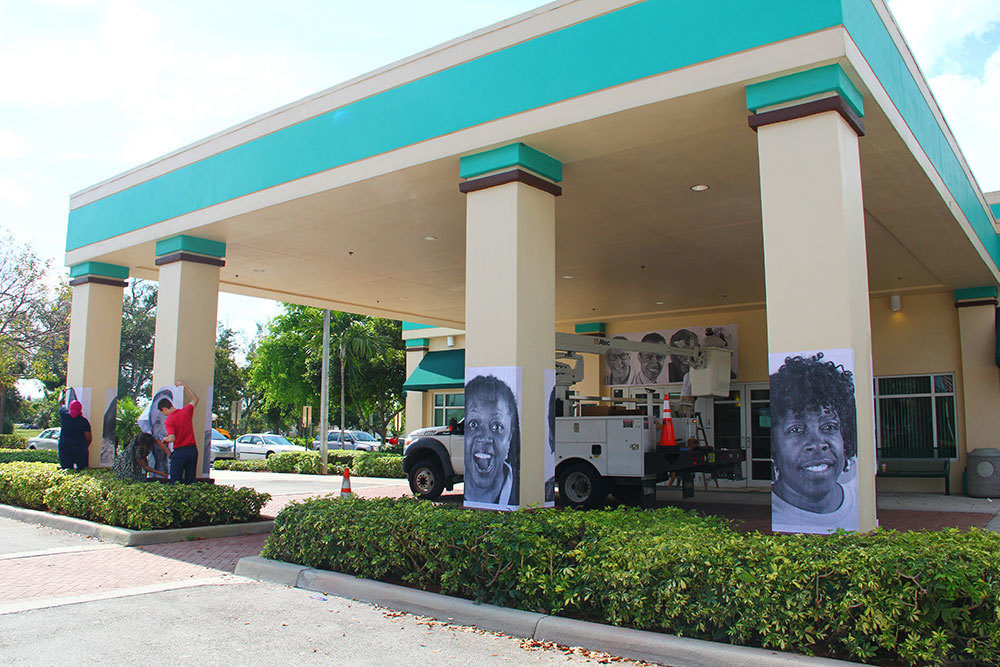 Created by artist Emma Anna, IMAG_NE is a modular sculpture that resembles a giant Scrabble letter holder. The artwork engages audiences to engage directly, photographing themselves as the missing “I”. The message behind this sculpture is that the viewer is to imagine themselves where they want to be, to dream, to be the “I” in imagine. The artwork has been decommissioned due to hurricane damage. 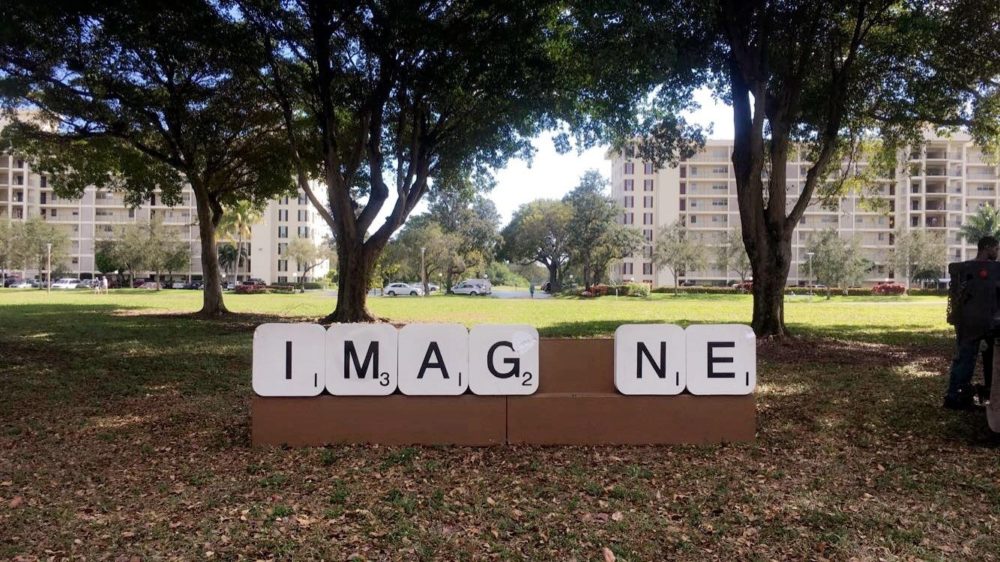 The Public Art Committee was approached by a Pompano Beach summer Camp Hula Mundo to temporarily display an artwork created by their Green Team camp. The Public Art Committee is proud to support such a wonderful artwork created by young and budding artists in the community. This artwork is a special piece as it not only shows the talent of these children but it also promotes recycling and the process of upcycling everyday objects that normally get tossed away as trash. The pieces used in this artwork were found littered on the beach and thanks to the ingenuity of the Green Team a beautiful work of art was created. This was a temporary Artwork and was removed December 2018. 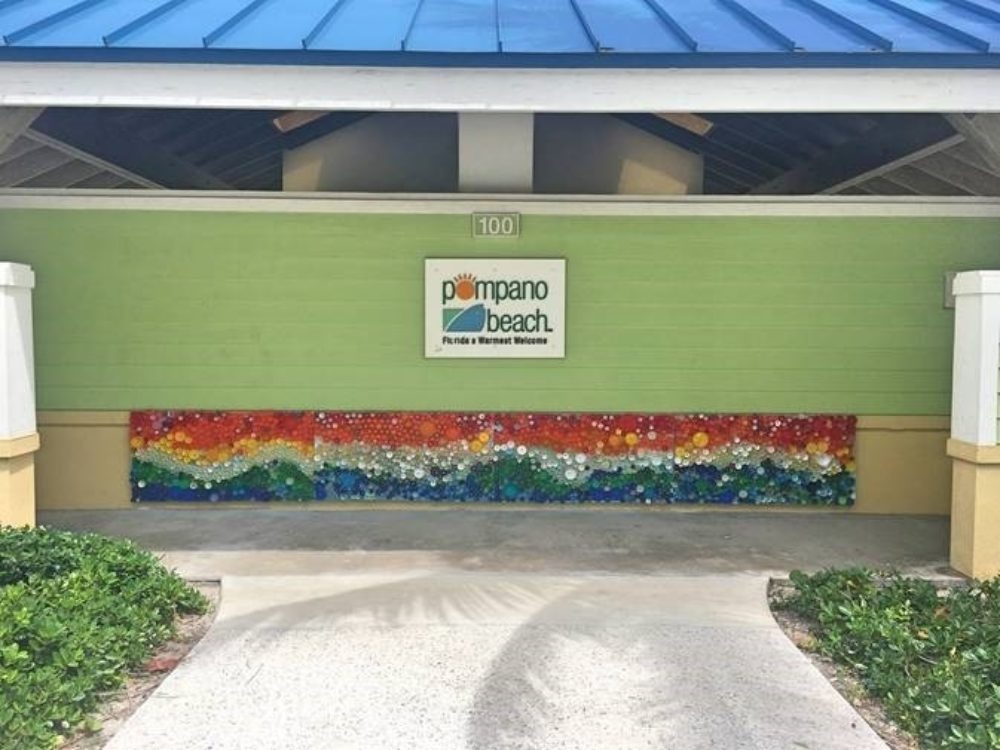 The Public Art Committee was approached by a Pompano Beach summer Camp Hula Mundo to temporarily display an artwork created by their Green Team camp. The Public Art Committee is proud to support such a wonderful artwork created by young and budding artists in the community. A group of Junior Counselors in Training, in their efforts to clean the beach and protect the environment, decided to investigate the origin and history of plastic straws. From there, they came up with the idea to create an artwork entirely out of straws. The artwork creation was lead by Lead Artist Makena Vargo. It promotes recycling and the process of upcycling everyday objects that normally get tossed away as trash. The artwork will be on display until February 2021. 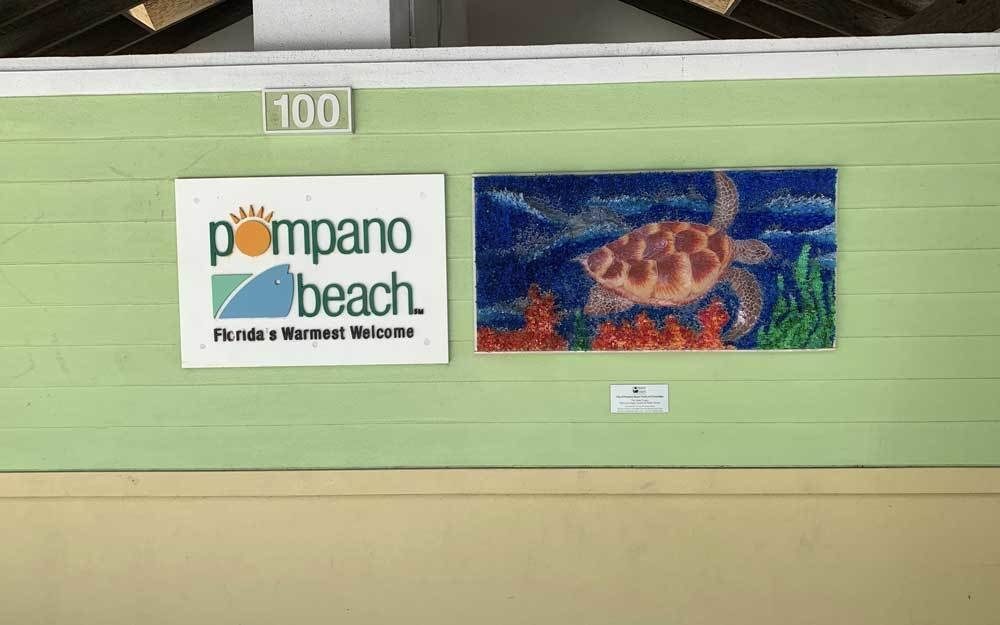 This mural was created through the donation of local artist Bill Savarese at McNair Park. 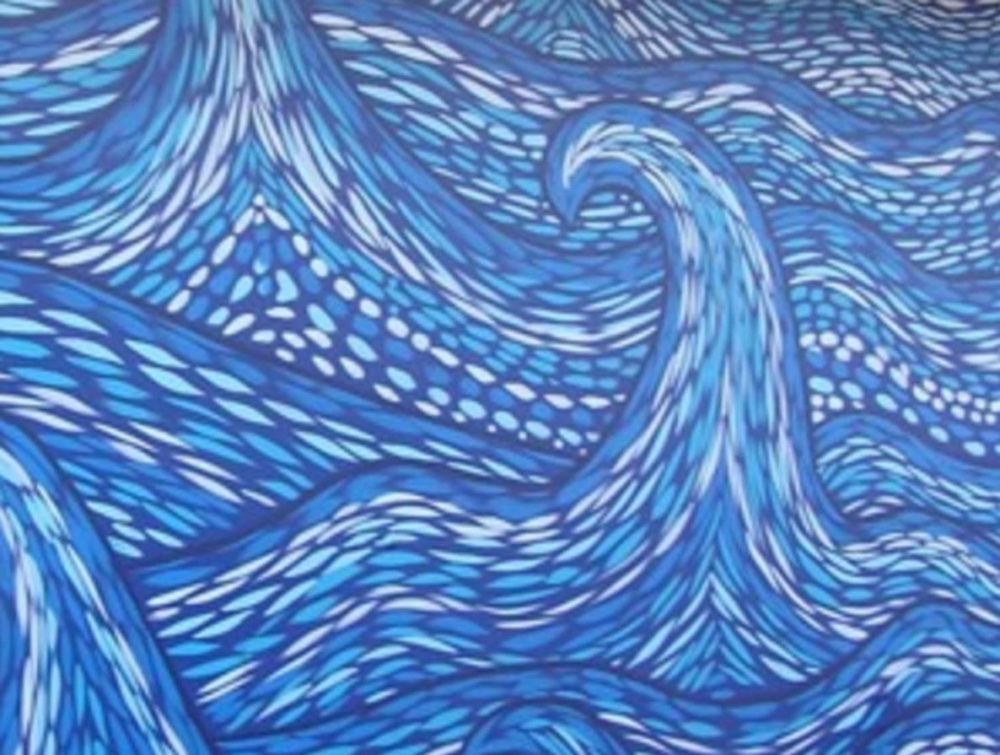